Our Blog is ending

As most of you will have noticed we haven't been updating this blog regularly for the past few months. This is mainly due to not having enough time but also that we are now using other social media, such as Twitter, to tell everyone what we are getting up to. This is more instantaneous allowing us to bring you the news as it happens.
As such, I’m sorry to say that we have decided that from now on we will not be updating this blog. We will however be posting more regular updates, sightings and our work on Twitter. For more in depth stories about our wildlife and the work we do we will be putting these on our website on a seasonal basis.

Plans for our new car park!


As most people who visit our site regularly will know our current car park at the end of Hawthwaite Lane is neither the best designed or the most user friendly. Over the years we have carried out various repairs as and when needed but we have now decided to start from scratch and as such have had plans drawn up for a new design.
We plan to enlarge the car park slightly by removing some of the unused boardwalks, removing the old ice cream hut from its current location and squaring off all the sides to make the most of the space available. The plan is to have 40 marked parking bays in the car park and two coach parking bays at the entrance. Unfortunately we can’t make it much bigger than this due to it being encircled by the reserve and its SSSI status (Site of Special Scientific Interest).
We are also hoping to reinstate the ice cream hut at the car park (it will now be located at the northern edge) but this will only be going ahead in 2016 subject to planning.

We are going to be having a consultation day on the 2nd October from 1pm to 7pm at Dalton Drill Hall for anyone who would like to see the plans in greater detail, ask any questions or raise any concerns that you may have. We will be leaving a display of the plans up for a week in the Drill Hall with comments cards for anyone unable to make the above date.

We are hoping to have the work started and completed by spring.

If you have any queries and are unable to make it to the consultation at Dalton Drill Hall please contact Emma Franks for more details at emma.franks@nationaltrust.org.uk 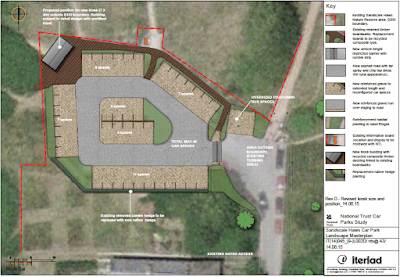 
Rosa rugosa, or more commonly known as Japanese rose or Rugosa rose, is a species of rose that is native to temperate and cold coastal sites in Eastern Asia, southern Siberia and Japan. It was first introduced to Europe and North America as an ornamental plant with many people liking the large colourful flowers and it can be grown as dense hedgerows. It is also used as a root stock and for breeding with other rose species due to its disease resistance and was renowned for its ability to withstand drought, heat, frost and winter hardiness as well as being able to cope exceptionally well with salinity.


Rosa rugosa has been planted in many areas due to its hardiness and low maintenance needs. However it also causes significant problems at coastal sites as once established it grows extremely rapidly, outcompeting all native plant species and it is extremely difficult to eradicate. The dispersal of the seeds is predominantly by birds that feed on the rose hips however this species can also be spread from broken fragments of the plants rhizomes that break off when the plant has been cut and removed for disposal.


At Sandscale Haws Rosa rugosa has been present on site since the 1980’s but it has spread from just a couple of small clumps to a current total of 15 stands varying in size from just 1m² up to the largest at 864m². We are currently working in conjunction with Natural England, who manage the nearby North Walney NNR to trial different techniques for removing this invasive species and restoring species rich dune grasslands. This is going to be an ongoing task as eradication of the species in a single year is impossible but hopefully the annual monitoring, treatment and removal of R. rugosa will prove effective.


It’s been a pretty good year so far for the Natterjack toads with us recording 468 spawn strings across the site. They were a couple of weeks late this year due to the cold spring that we had but they bounced back with the first spawn string being found on the 7th April and the last found on the 8th June. The Tadpoles are growing fast with a minimum estimate of about 50 000 across the site. The first Natterjack toadlets of the year were recorded last Thursday (18th June) down at the shore pools. They’re amazingly cute!

The Coralroot Orchids have also had a great year with the total number of spikes being recorded this year at 1817! This is the second highest number ever recorded on site since records began in the 1980’s. They we’re found in six dune slacks across the site with 2 of these having none recorded in them for the past 6 years.

We've just started carrying out surveys for other orchids on site and so far we've recorded Common spotted, Early Marsh, Northern Marsh, Bee and a few Helleborines but it's still a bit early for us to know exactly which ones.


Other highlights include a single Moonwort that was found in a dune slack during a Coralroot Orchid count. This rare fern is mainly found in Scotland, Wales, North and West England and is still declining. It hadn’t been seen at Sandscale Haws for over a decade until May of this year!


We also held a two day Bioblitz event at the beginning of June and received records of plants, birds, invertebrates, bats and fungi. A big thank you to everyone who came along and to the various organisations that helped to run the event. We are currently sorting through the records and inputting them on to irecord. 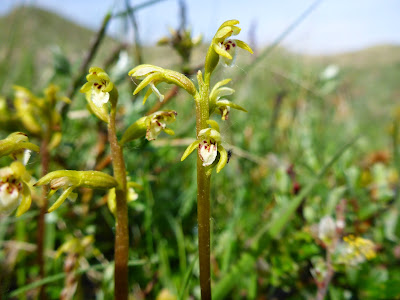 The Coralroot Orchid is found throughout Europe, Asia and North America but it is not as showy and colourful as most other orchids, standing at only 5-14cm tall with tiny flowers measuring around 5mm in length. Despite being found across such are large area they are extremely hard to spot due to their diminutive size with most people walking right past them. In the UK most plants are found in Scotland with a few sites in Northern England and most of the populations are thought to be small. 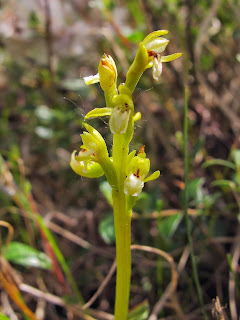 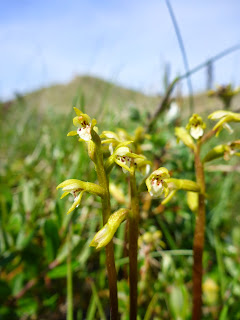 Here at Sandscale Haws we find them in relatively young dune slacks (wet areas) with short vegetation but it is also found in woodlands, moist boggy forest and infertile swamps across other parts of its range. Grazing with livestock and cutting of vegetation is critical to maintain suitable habitats here as the dunes are no longer mobile enough to create significant areas of pioneer dune slack. It is easily crowded out by other plants in unmanaged areas. 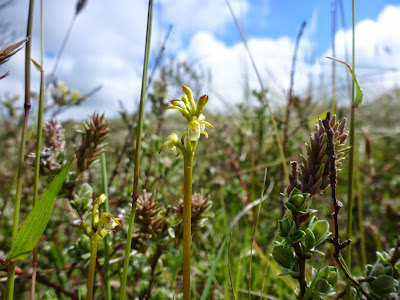 Despite its name Coralroot Orchid doesn’t actually have roots per say, but a branched underground rhizome that superficially resembles coral in appearance. The plant receives most of its nutrients from a fungus that has a symbiotic relationship with Creeping Willow, a shrub that is common across the site. Other species that are generally found in the same sort of areas and are associated with Coralroot Orchid include Variegated Horsetail, Glaucous Sedge, Early Marsh orchid, Marsh Helleborine and Round-leaved Wintergreen.

Back in the late 1980’s and early 90’s Coralroot Orchid was found relatively abundantly across the site in many of the dune slacks, with 1700 plants being recorded in 1989 and 3297 in 1990. Intensive surveys were carried out by staff and volunteers at this time. During recent years however it appears to have been in decline at Sandscale Haws and much of the UK with 2014’s count only being 177 plants and not a single one being recorded in 2013 after the extremely wet year of 2012. 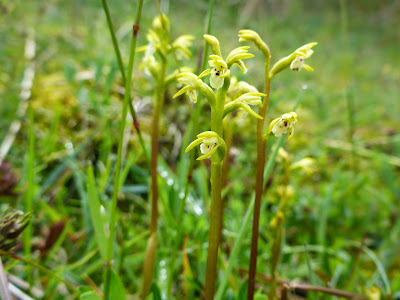 2015 however has turned everything on its head with huge numbers being found across the site. So far we have found them in 4 slacks totalling 898 flowering spikes with 516 of these being found in just one dune slack! We have a few more slacks to check over the next week, so we are hopeful that we will be crossing the 1000 marker which would be amazing as we haven’t seen numbers like these since 1991. Fingers crossed!

We couldn’t have managed these counts without the help of our ever enthusiastic volunteers so a big thank you to them!

Please note: Coralroot Orchids are extremely difficult to find at Sandscale Haws. To avoid any accidental damage to populations we encourage anyone who is interested in seeing them to contact the Rangers for advice before visiting. At times it may be possible to arrange a site visit with a Ranger to view the plants.
Posted by Unknown at 08:43 3 comments: